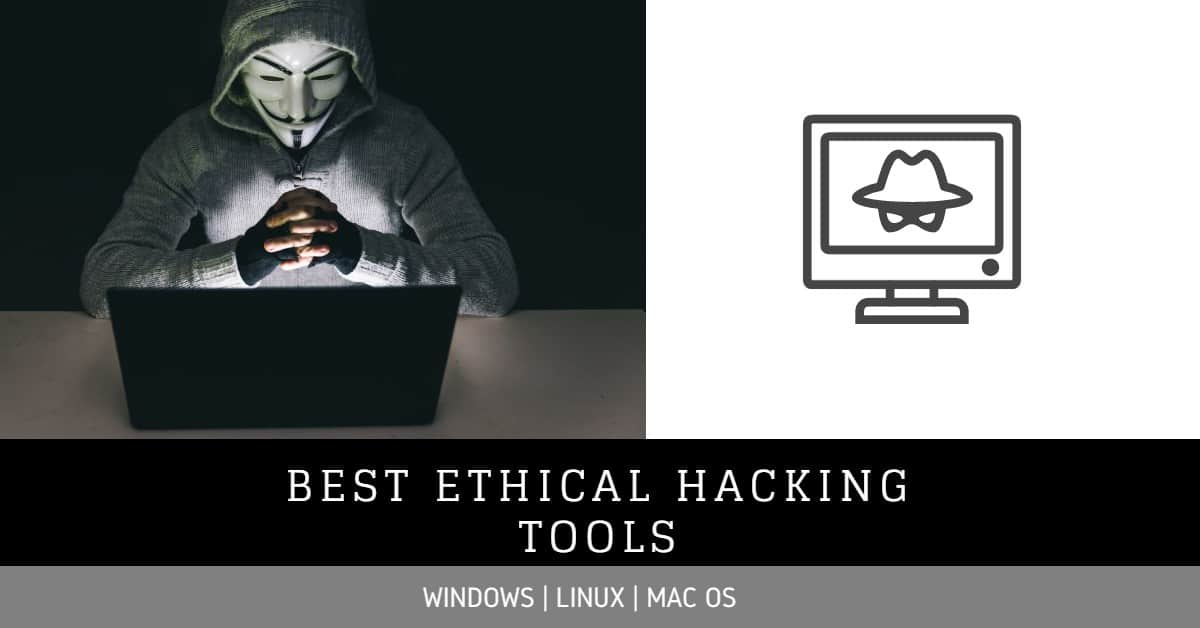 Ethical Hacking is growing faster in 2020 and everyone is just going behind it. Nowadays everyone wants to automate their works from sending email to posting on social media account. And for this activities you will require best tools or bots so that they can do automation work easily.

If you decided to choose an automation tool then you have to be very careful about the security of these tools. Because all these tools can be easily hacked by hackers if they are not coded well. And to test their strength you need good network security tools and sometimes best ethical hacking tools.

Ethical hacking Tools will test their ability and strength by attacking them in many ways. With these hacking tools, you can test your network security, password strength and even your smartphone vulnerability.

So lets go further and have a look at these best ethical hacking tools.

All the hacking tools provided here are free of cost and effective. You can easily download them from the respective website and test your network security. I am just publishing this article for educational purpose and we do not promote the malicious practice.

Most of the hacking tools are made for the Linux operating system but you can also run them in Windows 10 or Mac OX by installing Virtual Machines.

Metasploit is an open-source cybersecurity project that allows you to find vulnerabilities in remote software. It is available for Linux, Windows and Mac OS operating system.

With the help of Metasploit, you can create custom exploits and test the vulnerability of a system easily. These is very popular among Kali Linux users who want to try out android phone hacking.

The Metasploit security tool can be used to detect vulnerability in system, execute remote attacks, evade detection system and to run security scans.

John The Ripper is one of the most popular password cracking tools of all the time. This tool is used to crack the password of any operatig system and remote files easily.

It has the ability to detect the algorithm use to encrypt the password and prepare itself accordingly. This ability make its one of the intelligent password cracking tools and a good choice for ethical hackers.

These ethical hacking tools use the brute force technique to decrypt the password and algorithm such as:

NMAP is an open source security auditing tool which can be easily used by beginners on any operating system. Nmap (Network Mapper) is used for the network exploration and to scan the large networks easily.

It can see all the host connect in network and what application they are running and even which operating system thet are using. Nmap creates a map of those hosts and present them in graphical as well as simple map form.

Nmap uses the IP packets in novel way to determine the available host on the network. It is one of the most effective network mapper available on the internet.

It can do the following task for you:

Wireshark is a GTK+ based network protocol analyzer. It is also an open source project which is used to intercept and analyze the network in real-time.

With the sniffing technology, one can easily intercept and loads the network packet in human-readable formats. You can also use wireshark to monitor wifi network and to monitor packets which are transmitting over the network.

You can easily load them and know the password of any wifi network. Wireshark supports up to 2000 different network protocols, and is available on all major operating systems .

It is very simple and easy to use hacking tool due to its simple command line. Nikto is used to scan web server and perform a different type of test against the remote host. This tool can easily scan the base configuration file in any operating system or web server.

It can also tell you whether the server has multiple index files, HTTP Server options, etc

SQLNinja is a SQL vulnerability scanner bundled with Kali Linux distribution. This tool is dedicated to target and exploit web apps that use MS SQL Server as the backend database server.

Using SQLNinja you can:

Acunetix is an automated network security and ethical hacking tool which is use to audit your web application by checking vulnerabilites like SQL injection, cross site scripting and other exploitable vulnerabilities.

Basically it is used to scan any website or a web application that can be easily accessed by any web browser through HTTP or HTTPS protocol.

Aircrack-ng is one of the best favorite ethical hacking tools to crack the WiFi passwords. I personally use these to test my WiFi vulnerability in different protocols including WEP and WPA.

It includes full support for 802.11 WEP and WPA-PSK networks and works by capturing network packets. It then analyzes and uses them to crack Wifi access.

In these network tool, you can monitor packet which is transmitting between your WiFi and connected devices and easily carck the wifi password by a brute-force attack. It is one of the best tools for hacking WiFi passwords.

Kismet is a network detector, sniffer and an intrusion detection system that is used to keep an eye on the packets transmitting over a WiFi network. It works on all network adapters which support monitor mode.

If you want to make a clone of social sites like Facebook, twitter and try to attack on friends social account then the hacking tool will help you. It will create a clone of any website under one minute and can harvest their email id and passwords easily.

This Python-driven tool is the standard tool for social engineering penetration tests with more than two million downloads. It automates the attacks and generates disguising emails, malicious web pages and more.

There are numbers of Ethical Hacking Tools are available on the internet which are used by many professionals to test the vulnerabilities in the network. If you want to learn ethical hacking you can start using these tools.

But be aware there are also many tools which are infected with the virus and you should be aware of them. So always download these tools from official websites.