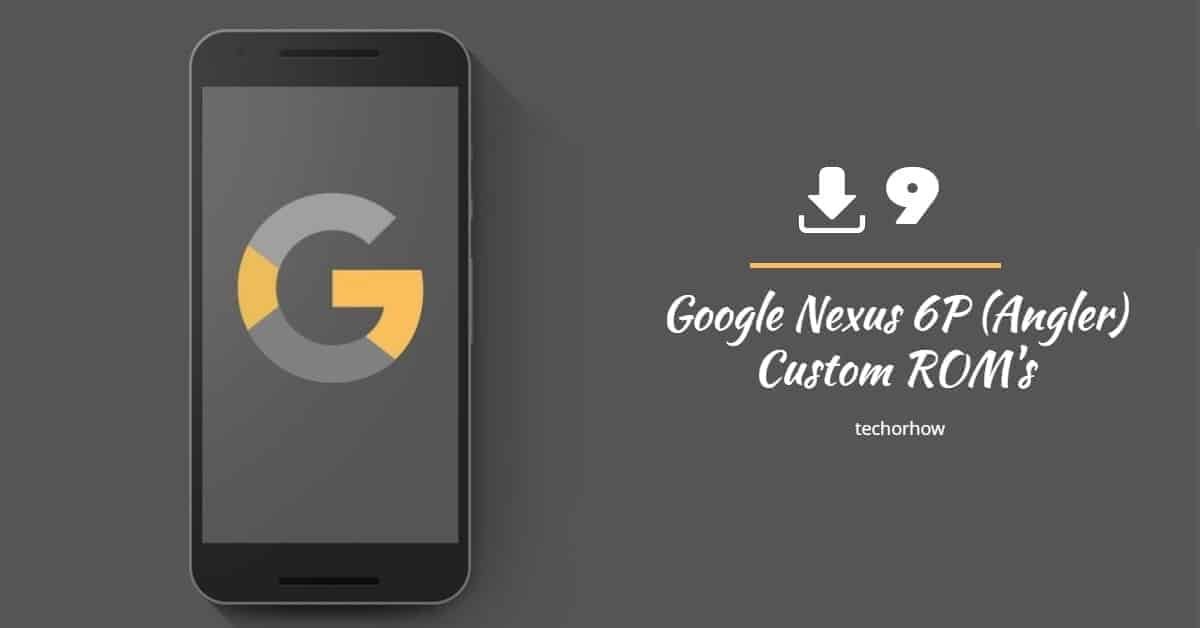 It comes preinstalled with Android 6.0 Marshmallow and later upgraded to Android 8.0 Oreo. If you have a Nexus 6P device and want to install custom rom then continue your reading.

we all know that stock rom are lack in features and customization. Although Nexus 6P received a good developing support still it misses some important features which a stock rom can not provide.

So today i am going to list out best Nexus 6P ROMs which are developed by third parties but are more enriched with features and customization options.

As i said earlier Google Nexus 6P has many custom roms built by many developers but i m only going to list out 9 Best Custom Rom which are choosen on the basis of performance and stability.

All the custom rom shown here are stable and updated to latest version. They all are bugfree and ready to install in your Nexus 6P device.

Before installing any custom rom ensure that your Nexus 6P is on appropriate Vendor Image as specified by ROM developer. So here’s the list:

If you still not prepared well for custom rom then try SuperXE Stock Oreo. This is an AOSAP based rom which is similar to stock Android Oreo ROm without any custom feature and customization.

It will provide you the same stock experience as Nexus 6P Rom provide. Here are some features of Rom:

It is completely stable and daily use ROM. You can try this rom before going to Nexus 6P Custom Rom.

Pure Nexus is one of the most used customs rom for Google Nexus 6P device. It is based on the stock android but with more value added features and functionality.

It has preinstalled busybox, int.d support which is required by many root utility to sufficiently work. It also well-packed with the stock Google Nexus wallpaper, themes, sounds and also boot animation. So you don’t have to miss them again.

Some more features of Pure Nexus are:

This custom rom will provide you the best experience on Google Nexus 6P device. So why wait, go and installl it.

Nitrogen ROM is also based on the AOSP but it has more advanced features and customization option than a stock rom . With the help of this rom you can easily customize status bar, navigation bar and more.

Here are the full list of option which you can customize easily:

Resurrection Remix is a Rom based on the CyanogenMod, Omni and Remix build. This rom is the combination of performance, customization and most new features.

You can easily customize:

DARK ROM is a version of LineageOS 15.1 with stripped down features which give a fast performance. LineageOS which previously known as CyanogenMod is enriched with customization and lots of new features to give a boost to the Nexus 6P device.

The ROM is very Close to the Pixel Smartphones in features and UX. It supports SafetyNet and ViperAndroid out of the box.

crDroid is another best custom rom for Google Nexus 6P angler based on LineageOS. It provides you the pixel like UI but with more advanced features like:

AICP is also a lineage-based custom rom for Google Nexus 6P angler. As build on the lineageOS it has all the feature offered by any LineageOS based ROM.

Do you Know? What is Android Engineering Mode & How to Access it?

You can use this rom if you love LineageOS based ROM. It also provide similar tweaking and customization option like another lineageOS ROM provides. Some of them are status bar customization, navigation button tweaks and more.

MIUI 8 is the latest iteration of MIUI Rom developed by the Xiaomi company. This rom is based on the Stock MIUI rom which are found in most MI devices. But now you can also enjoy MIUI in your Nexus 6P device.

This rom are based on stock android with lost of MIUI customization and without app drawer but with MIUI launcer. It will provide the same MIUI experience received on MI devices.

Download the ROM and Flash it after Wiping System, Cache, and Dalvick Cache.

How to Flash Custom ROM in Google Nexus 6P Device

To flash custom rom in Google Nexus 6P device you need to download appropriate ROM and vendor image from developer site. Then you also need to download GApps based on the android version and requirement.

Step1: Download Custom ROM and Vendor Image as listed above.

Step 6: Flasg the GApps and reboot.